Keep in mind that some of the links in this post are affiliate links and if you go through them to make a purchase I will earn a commission. Keep in mind that I link these companies and their products because of their quality and not because of the commission I receive from your purchases. The decision is yours, and whether or not you decide to buy something is completely up to you.

Yikes! Having a prolapsed uterus while pregnant was frightening. Let me just tell you, it was a scary ride with a happy ending!

Learning about the problem

When I learned that my uterus literally was exiting my body I guess I was thankful to know that what I saw was not a very tiny, 14 week fetus. Let me take you to that day, if you will join me. I was taking a bath, shaving my legs getting ready to head to the beach. That is when I felt something very strange, like a weird sensation so I looked down, It sort of hurt, so when I noticed something that shouldn’t be there, I stood up, and I screamed. I screamed for my husband in a terrible, scared voice. He came running and I just pointed at it, a strange ball in a place it should not have been. I asked him, with a panic in my voice, “what the hell is that?” He and I both thought for sure, it was the baby’s head.

As you can imagine; an immediate call was made to my midwifes office, while we were already in the car headed to the ER. Thankfully, we do not live in a large area and I was brought into the Emergency Room pretty much right away. Thank goodness for small towns, right!? The emergency room doctor did not make me feel any better, with the “I have no idea what that is, I have never seen anything like that.” Talk about bedside manner, geesh. I think I might have gone into some sort of shock at this point.

Fast forward a bit, but I think we waited quite a while. The OB finally made her way down to the ER to check me out. She checked the baby and everything seemed okay. The heart rate was good and everything was in its proper place inside my body. Technology is amazing!

The OB concluded that I had a prolapsed uterus. Um, okay, that is not something I had ever read about in a pregnancy book, no one ever warned me that this was a thing at all. This is my third baby for Pete’s sake. I should already know about most everything right. Nope! My uterus has decided to leave my body and I have no idea why. To make me feel even more like a wreck, I learned that the OB I was seeing also had never seen it in pregnancy. In fact, no one at the entire hospital had seen it.

I was pretty much told to go home and rest, take it easy and was given an appointment to see my Midwife as well as to follow up with another OB, an at risk pregnancy doctor, in the big city of Portland. He might be able to help me. I had to get a very thorough ultrasound and make sure the baby and I were good to go.

I went to see the OB and she had consulted with a doctor in Portland, who also had never seen anything like this. He did recommend that I start using a pessary though. What is a pessary, you ask? Well, let me just say that it is a strange contraption that acts a lot like a tampon, but for older ladies who normally used these things. You see, a prolapsed uterus is something that normally happens in older woman.

The OB fitted me with a pessary she thought would work. It was super awkward to have to get fitted for. Not at all like getting fitted for a bra as you can probably imagine. She tried several different ones, but having never done it for a pregnant woman, it was a little different for her as well. I tried to just remain calm and relaxed as best as I could, but that was not easy. I think it was my most awkward time at a doctors appointment. Anyway, she found one that she thought would work and sent me on my merry way. Oye ve, it was so strange. It felt weird and I was not super happy with the current situation.

After the appointment my husband and I went to Shaws to do some grocery shopping. Thinking that would be an easy thing to do, off we went. As we were walking around putting this and that in our cart I felt a weird sensation again. Apparently grocery shopping would make my uterus fall out and it would seem that my uterus was as strong as the Hulk because it pushed my pessary right out. There I was, in the middle of grocery shopping and my pessary was hanging on for dear life.

I thought it felt weird when it was inside, haha, I hadn’t felt the half of it. I pretty much ditched my husband and ran to our truck. That is when I sat in the seat and reached down and pulled it right out. Gross, right? Sorry! You can’t unhear that. We called the OB and off we went for a new one! Just as a way to shorten this up, we never found a pessary that worked for me!

A couple weeks went by and we brought the two older boys to Portland with us for the ultrasound. We knew going into it that the baby was growing and breathing and that I did not have a miscarriage, even though that was the original fear. The boys got to watch, in awe, as every inch of there baby sister was measured and inspected. She seemed fine and everything seemed to be going great.

While this was going on, work was super tough. I worked at a golf course as part of the grounds crew which was not easy. My uterus would actually fall out at work more often than you could ever imagine. Climbing onto my big mower, it would fall out. Getting off the mower, it would fall out. Lifting something, out. Crouching on the ground, there it went. It was frustrating for me and for everyone else.

The rest of the pregnancy was pretty crazy. I basically tried to work, although my husband didn’t want me to. My work was accommodating and let me go home any time I wanted. I am so thankful for their understanding of my unique situation.

Every visit to the midwives was a roller coaster of emotions. I am a very open person so it didn’t bother me too much when every midwife wanted to see what was happening. After all, they had never seen it, so I was able to educate them with showing them my uterus, on the outside.

I did a lot of research online and there was not a lot of information. From what I could find there are three documented cases of this happening since 1967. I am sure there are more woman who have experienced this phenomenon, but seriously, it is rare.

At 32 weeks I was put on bed rest. I did not want to do this at all. I am an active person, but I knew that it was best for our baby girl, so I did it… sort of. I had learned my limitations over the last months. Of course, I knew what would cause the issues. I avoided most physical activity, but not all of it! Thankfully, we delivered a healthy baby girl at 38 weeks. But the birth story, that is for a different post. I will tell you all about it, believe me, I need to get it out! If you would like to read about the birth experience please head over to my post about it!

Stay tuned for more on the prolapsed uterus! And, if you are experiencing anything like this, I would love to talk to you. I am open to answering any questions and giving anymore details that might be wanted or needed.

WebMD has some useful information about Uterine Prolapse. Be sure to check it out for a lot more information. 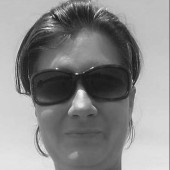 Dedicated wife and devoted mother with the heart of a teacher.

Letter “H” IS FOR HERO

Any cookies that may not be particularly necessary for the website to function and is used specifically to collect user personal data via analytics, ads, other embedded contents are termed as non-necessary cookies. It is mandatory to procure user consent prior to running these cookies on your website.