Keep in mind that some of the links in this post are affiliate links and if you go through them to make a purchase I will earn a commission. Keep in mind that I link these companies and their products because of their quality and not because of the commission I receive from your purchases. The decision is yours, and whether or not you decide to buy something is completely up to you.

I really enjoyed reading The Hunger Games, because the book is very compelling and you can follow the book really well. The setting in the story is very well described and thought out. I feel like I connect with almost all of the characters except for Haymitch. His character is very drunk all the time because he lost all of his family because of The Hunger Games.

The story begins in district 12 on reaping day. The day the hunger games competitors are chosen Katniss and Prim wake up. Prim, Katnisses younger sister is very scared because it is her first year in the hunger games drawing. Katniss comforts Prim. Then she sneaks out beyond the fence to go hunting in the woods with her best friend Gale. They see each other and call the other one over. They share a breakfast with goat cheese from Prims goat and fresh bread from the bakery.

Katniss meets up back at her house to put on a dress for the reaping. The dress is all gray because of the solemn situation. Prim and Katniss walk into the center of the poor part of district 12. They line up by age 12 in the back because they have the least chance of getting drawn. 18 year olds are in the front because they have the highest chance of being drawn. 13 to 17 year olds are in the middle. The person who draws the names from district 12 is Efiie Trinket. She comes onto the stage to select the competitors.

Effie first walks onto the stage and says to all the children welcome to the 74th annual hunger games. May the odds be ever in your favor. She then says ladies first and reaches her hand in to the bowl filled with names. She selects Primrose Everdeen (Prim). But before Prim could get onto the stage Katniss volunteered to take her place. The boy tribute is Peeta Mellark.

Both Katniss and Peeta are taken into the justice building to say there last goodbyes to  everyone. Then they get on a train to the capitol. There they meet Haymitch ,their trainer. He is the only living district 12 winner because he won the 50th hunger games. Peeta and Katniss suspect that he isn’t going to be much help because he smells of liquor. He says to them that he will sober up and try to be the most help to them as possible. Katniss then goes back to her room on the train and tried to sleep. She is mostly restless from what is in her near future the hunger games.

The train arrives in the capitol. The people in the capitol have weird hair colors and clothes amd are very excited to see them. They are the ones that watch and bet on people in the games. Katniss and Peeta are rushed to the stylists to get ready for the opening ceremonies. Katniss meets Cinna her main stylist and they talk about what she is going to wear. She expects a coal miner get up because that is district 12 import. Instead Cinna decides to make them look like coal burning. He puts fake flames on them to get the attention of the capitol and they did just that. As soon as they got on the carriages the Capitol took immediate notice to them and were screaming there names.

The group of Katniss, Peeta, Effie and Haymitch ride the elevator to the rooms on the 12th floor. They get there and eat the dinner of pea soup and chicken. Everything that they don’t have in district 12. The next day they go down into the training room. They work on things that they don’t know how to do like knots and camouflage. They made sure not to show of weightlifting for Peeta. Andd not to do archery for Katniss, because that is their best skills. They then go into the private session to show the game makers what they can do. Katniss does archery and nobody pays any attention to her. She shoots an arrow at an apple to prove herself and then leaves.

She goes back upstairs to see the score. 1 was the lowest and 12 is the highest. Peeta gets a 9 and Katniss gets the highest out of the 24 with a 11. They all celebrate and then go to sleep. The next day they all get ready for the interviews. When the interview comes, Katniss is in a red dress. The dress glows red when you spin. Everything goes fine until Peeta confesses his love for Katniss. Katniss gets very mad at Peeta and hits him. Haymitch told her he was helping and that it was all fake. They all go to bed and the next day they get transported to the arena.

Cinna goes with Katniss and tthey put her in a light but warm clothing and say theiregoodbyes. Katniss hears the countdown and gets on her pedestal. Then it goes up and they can see the arena. There’s a lake and a forest and Katniss spots a bow. She gets distracted and can’t get the bow. Another girl gets it so Katniss runs off with only a backpack. She runs for a day and then sleeps in a tree. The next day she smells something burning and sees a fire and a wall of it going straight towards her. She runs away and gets burnt on her way. Then she finds a little pond to stay in and cool off her burns.

Katniss then sees a package and there a cream in it. She puts it on her burns and runs cause she hears a group of other competitors coming. Then she runs and climbs a tree because it is dark. She realizes its a pack of the huge kids from district 1 2 and 4 and Peeta. Then she sleeps a little until she sees a pair of eyes. She realizes its the 12 year old competitor, Rue. Rue just points to a nest of tracker jackers that when you get stung you are almost paralyzed instantly. Catniss cuts it to send it down on the kids trying to kill her. She gets 3 stings on the way. The nest opens and kills 2 and injures the others. Katniss runs away and steals the bow and arrow from one of the girls.

Katniss wanders for a while and then finds Rue. They form an alliance and share their things. The two also form a plan to steal all of the supplies that the tributes from 1 2 and 4 have. They set a plan where Rue starts 3 fires in different spots while Katniss tries to destroy the supplies. She sees one of the girls run through the area but thenrealizes that its surrounded by bombs. Katniss shoots an bag of apples with an arrow and sets of a bomb destroying the supplies. She gets away with only an injured ear and goes to find Rue. Katniss doesn’t find her until she hears her scream. She runs toward her only to find her in a trap. Then Katniss sees a boy throw a spear and kill Rue. Katniss is filled with emotions and shoots the boy and kills him.

Katniss is sad and then decides to find Peeta. The game makers announced that if your partner from the same disrtrict and you make it to the final 2, you can win together. So she goes to find Peeta and finds him almost dead and camouflaged in a rock. She tries to help his wounds but can’t. Until she hears that the gamemakers are having a feast at the starting area. You will find a bag with what you need there. So Katniss leaves Peeta to go get it. When she gets there she sees one of the girls get her bag and run.

Then she sees the girl from district 1, Clove, run to get the bags and then Katniss does too. She gets there and Clove throws a knife at Katniss and hits her in the head. Clove leaps onto Katniss and is about to kill her. Then Thresh, a huge boy comes and asks if she killed the little girl, Rue. She said no and then kills her and tells Katniss to run because she helped Rue.

Katniss gets back to Peeta and gives him the medicine. She waits for a day until Peeta feels better. When he does they go hunting and kill a couple things. Peeta finds poison berries and puts hem in his bag. A girl then steals them and eats them and dies. That means there are only 4 people left. Katniss, Peeta, Thresh and the boy from district 1 Cato. Then they hear a cannon meaning a death and Thresh died.

They run back to the beginning when they hear Cato scream. He is running away from wolves and they get on top of the Cornicopia. To get away from the wolves Cato grabs Peeta and tries to kill him. Katniss shoots him in the hand and Cato falls into the wolves and dies. Then the game makers announce that Peeta and Katniss must fight. But instead they threaten to kill themselves with the poison berries. The game makers decided that 2 winners is better then no winner and give in letting them both win.

And, ending the 74th hunger games, they were the first 2 people to win a single hunger games.

To learn more about the series, check out Wikepidia “The Hunger Games”.

If you want to read more of my writings, feel free to check out WHAT SWIMMING MEANS TO ME. 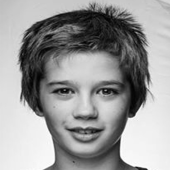 The oldest brother, smart and musical with a honest and mature heart.

THE LETTER “C” IS FOR COURAGEOUS

8 Tips to FIGHT THE SCHOOL COLD